Art is a tool of resistance and one of the deepest forms of expression.

About DWN’s Artist in Residency Program

Detention Watch Network (DWN) initiated its inaugural Artist in Residency program in 2022 in recognition of the role that art plays in the movement to abolish immigration detention. DWN believes that artist collaboration is essential to create depth and richness in our storytelling. DWN’s Artist in Residency program supports artists who are directly impacted by immigration detention to amplify and celebrate their work. 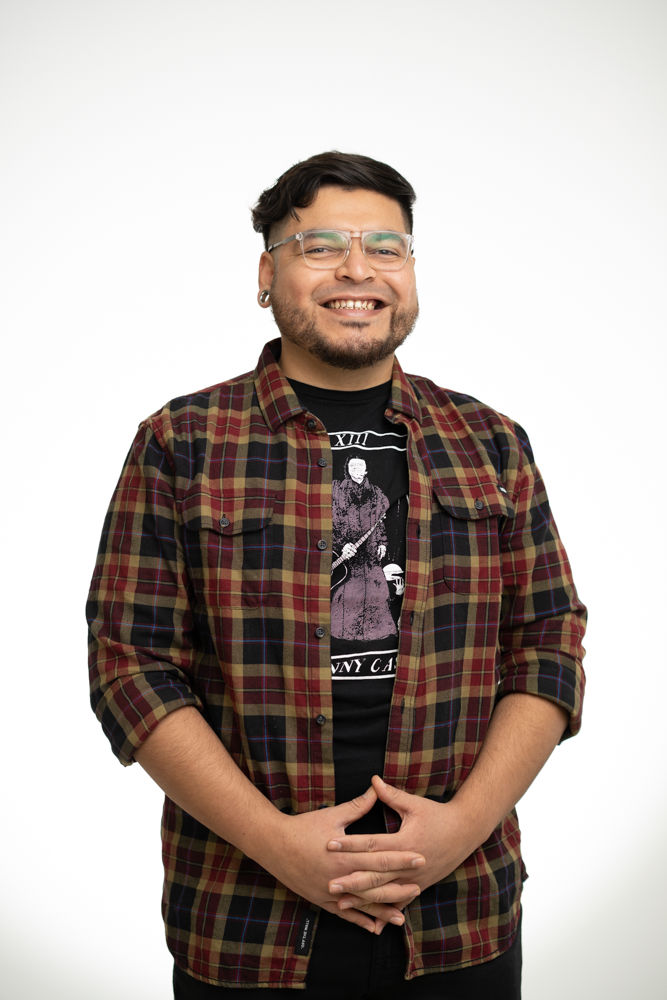 Detention Watch Network’s (DWN) 2022 Artist in Residency is Miguel Lopez. Miguel is a talented artist and long standing community organizer. Miguel’s preferred artistic medium is printmaking on linoleum. Miguel has a deep connection to Detention Watch Network. As the membership organizer at Organized Communities Against Deportation (OCAD) in Chicago, a member of DWN, Miguel has attended, organized and led Network events, trainings and actions.

Why is immigration detention abolition important to you?

As someone who had to leave their home community as a teenager, I firmly believe that humans should not be punished for moving across borders to find stability and places to thrive. Immigrant detention should be abolished because incarcerating migrants will not end poverty in their home countries. Putting people in ankle shackles will not end the violence that they’re running away from. Digitally tracking and monitoring migrants will not stop the environmental disasters that capitalism created in their homelands. Immigrant detention, in all its forms, does nothing to support these families, it only exacerbates the harm they have endured and contributes to the constant restriction of movement for working class people, especially communities of color.

Instead of punishing migration, we can use those resources to create avenues and processes for migrants to thrive, as we continue to organize to create new ways of living and coexisting that will replace this current capitalist empire.

What does your artwork represent?

My artwork represents an invitation to question the dehumanizing systems that we currently live under, and the role we play in upholding or dismantling those systems. It also represents a collective feeling of rage and thirst for justice. And it illustrates community visions for a different world where all Peoples are able to practice self determination and their lives would be more valuable than profit.

What or who inspires you?

I’m inspired by all the working class people constantly organizing to create a more just world. Especially people who are currently incarcerated, living under occupation, and those struggling to create alternatives as their countries are being strangled by US sanctions. I also find inspiration in the day to day activities that show who we are as humans and the environments we inhabit; for example cooking and eating meals, working, taking a walk, dancing, reading books, looking out the window, having a conversation, etc. I have faith that the People will win, and until that happens I will continue to contribute to the struggle with my creative skills.

Miguel’s Artist in Residency Project spotlights ten individuals either currently or formerly detained in immigration detention facilities that represent most of the #FirstTen detention centers as a part of the Communities Not Cages campaign. #FirstTen facilities were a roadmap of where to immediately begin facility shutdowns when the Biden administration came into office.

Each individual portrait of the ten directly impacted individuals celebrates what brings that person joy. After experiencing trauma in detention, Miguel wanted his work to speak to the wholeness of the person and where they find fulfillment. Miguel interviewed each person by phone to better understand their story and create their portrait based on their own words. Miguel deeply appreciates the courage of Angela, Elder, Heber, Jesus, Jorge, Jose, Lourdes, Lucero, Shemoi, and Sonia. for sharing their story and their deep commitment to continue fighting for the freedom of the migrant community. Miguel would also like to thank the #CommunitiesNotCages campaign members who are leading local organizing efforts at each of these seven detention facilities that connected him with the directly impacted individuals featured in this project.

Sign up to receive reports, action alerts, and our newsletter.

Help strengthen a network of advocates and activists around the country fighting for the dignity and rights of immigrants in detention.